Not to be confused with the LEGO toyline for the series.

The Unikitty! Theme is the main theme song for Unikitty!. It is performed by Japanese metal idol band BABYMETAL.

Female Astronaut: (In spaceship with other female astronaut.) Have you ever seen anything so beautiful?

Male Astronaut: (outside of space with other astronaut) Okay, almost there. A little to the left. There! Woo-hoo!  Male Astronaut #2: Yeah!

(It shows a saloon where a man is playing piano, they then throw food at him) People: (notices the T.V.) Yeah!

(It shows a man playing a piano in a saloon, then we speed over to the saloon door where a bandit bursts threw) Bandit: I told you not to play that song .... While my favorite show is on! (Speed over to TV) People: Yeah!

Unikitty: (Face on TV.) Hiiiiiiiii! (Satellite crashes into the tv.) 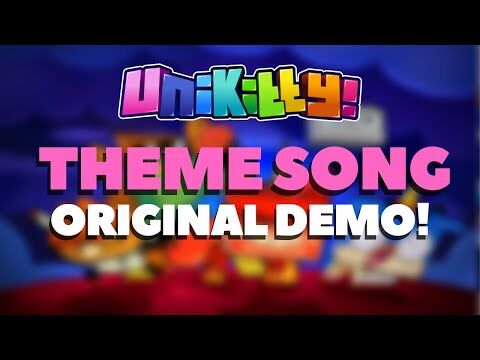 Retrieved from "https://unikitty.fandom.com/wiki/Unikitty!_Theme?oldid=36867"
Community content is available under CC-BY-SA unless otherwise noted.